Original footage possesses an aura of authenticity. The insights it can provide into the reality of World War I are, however, always mediated representations, and never genuine depictions of how things actually were. Bans on filming imposed by military commanders, tight censorship constraints, and a number of further restrictions set narrow boundaries to production companies which aimed at shooting pictures from the war. Accordingly, a large portion of moving image coverage ?of the front? was in fact made up of re-enactments filmed miles away from actual combat operations. View more

Cameramen were despatched to battlefields across Europe, covering events at the Western and Eastern fronts, operations from the Alps to the Caucasus, as well as in Africa and the Middle East. Depictions of battle scenes, regardless of whether they were authentic or re-enacted, served as powerful tools of propaganda. They were used by all combatant powers to re-enforce notions of military and moral superiority over opposing forces. Filming on the battlefield was dangerous, and cameramen were restricted in their movements by the size and weight of the cameras and tripods. As a result, the action often had to be captured from a fixed viewpoint in the distance. The battle film became a genre in its own right and longer, edited films of major operations were immensely popular with cinema audiences at home.
View more

Between June 1915 and November 1917, a series of battles which became known as “Battles of the Isonzo” were fought between Italian and Austro-Hungarian troops. The footage assembled in Isonzói-csata was filmed at various points between spring and autumn 1917. View more

The Somme offensive took place during summer and autumn 1916 and resulted in heavy casualties on all sides – more than one million men were wounded or killed during the battle. This major military operation has also become a significant event in the filming of the First World War. View more 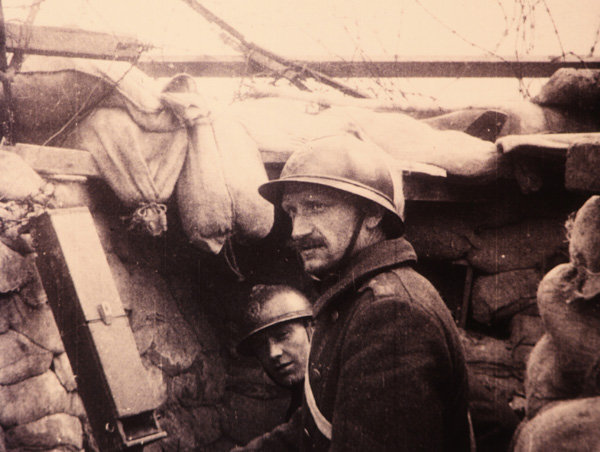 Screenshot of a Belgian documentary that was created ten years after the end of the war. View more

The entry of the Ottoman Empire into the war on the side of the Central Powers in October 1914 seriously threatened British interests in the Middle East. Fighting at the Mesopotamian Front –present-day Iraq – lasted for four years, from November 1914 to November 1918. View more

This production by Pathé Frères shows operations of the Russian Army at the Caucasus Front, where the Russian and Ottoman Empires were fighting on opposing sides of the conflict. The front lines of the First World War were drawn across many locations in Europe and beyond. View more

The obstacles camera operators met at the front essentially consisted of two problems: firstly, the military did not allow them to shoot actual battle scenes. Secondly, their technical equipment did not allow them to shoot actual battle scenes. The solutions the film industry sought to serve the public's interest in images from the war had to take these circumstances into account. Most typically, they consisted of fake scenes standing in for actual combat operations: topical productions were composed out of shots taken during manoeuvres, trainings, and drills, stock footage of guns and ammunition, infantry actions re-enacted for the camera, footage of ruins, and images taken at the front before and after actual combat. View more

A good example for how the military staged war footage for the camera is “Sur la route de Cernay”, a short reportage of 1914. French soldiers present the trench systems that ran from the outskirts of Reims through the village area of Cernay-lès-Reims to the front. View more 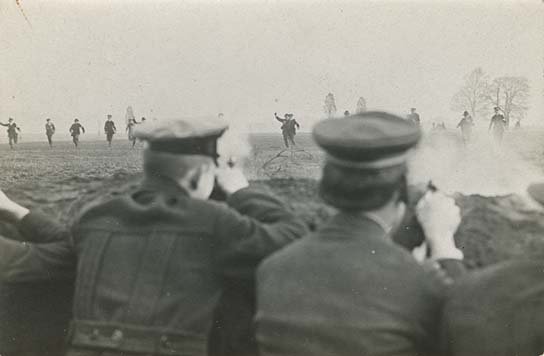 A photo shot by the German camera operator Wolfgang Filzinger, probably on the occasion of an exercise or a public demonstration. (Note that nobody wears a helmet.) View more

Set away from the combat operations, the camera accompanies French patrol boats through the densely vegetated river system of the Vardar. View more

Cameramen at the front

Camera operators appointed to the front encountered a number of problems that complicated their work. In an article written for a German cinema journal in 1915, the front cameraman Wolfgang Filzinger named some of the major challenges: lenses and films were slow, the bulky and heavy cameras and tripods had to be kept ready for use all the time, and when waiting for interesting motifs such as an exploding grenade, the operator had to spend long times in the danger zone. In addition, cameramen had to hide themselves and their equipment not only from the enemy, but also from their own comrades: when noticing that they were filmed, soldiers often turned towards the camera and started waving and grinning, thus making it impossible to shot images that would be regarded as “authentic”. Furthermore, camera operators had to be familiar with military terms and modes of behaviour, otherwise they would risk being pilloried by soldiers.
When filming the combat zone, many camera operators tended to work with wide angles in order to achieve a field of view as large as possible, because it was unpredictable where something spectacular would happen. As a consequence, the aesthetic quality of such images in terms of composition or depth of field was often mediocre. All these things considered, it becomes clear that censorship, admission control and enemy fire were by far not the only difficulties that cinematic war reporting had to face.
View more 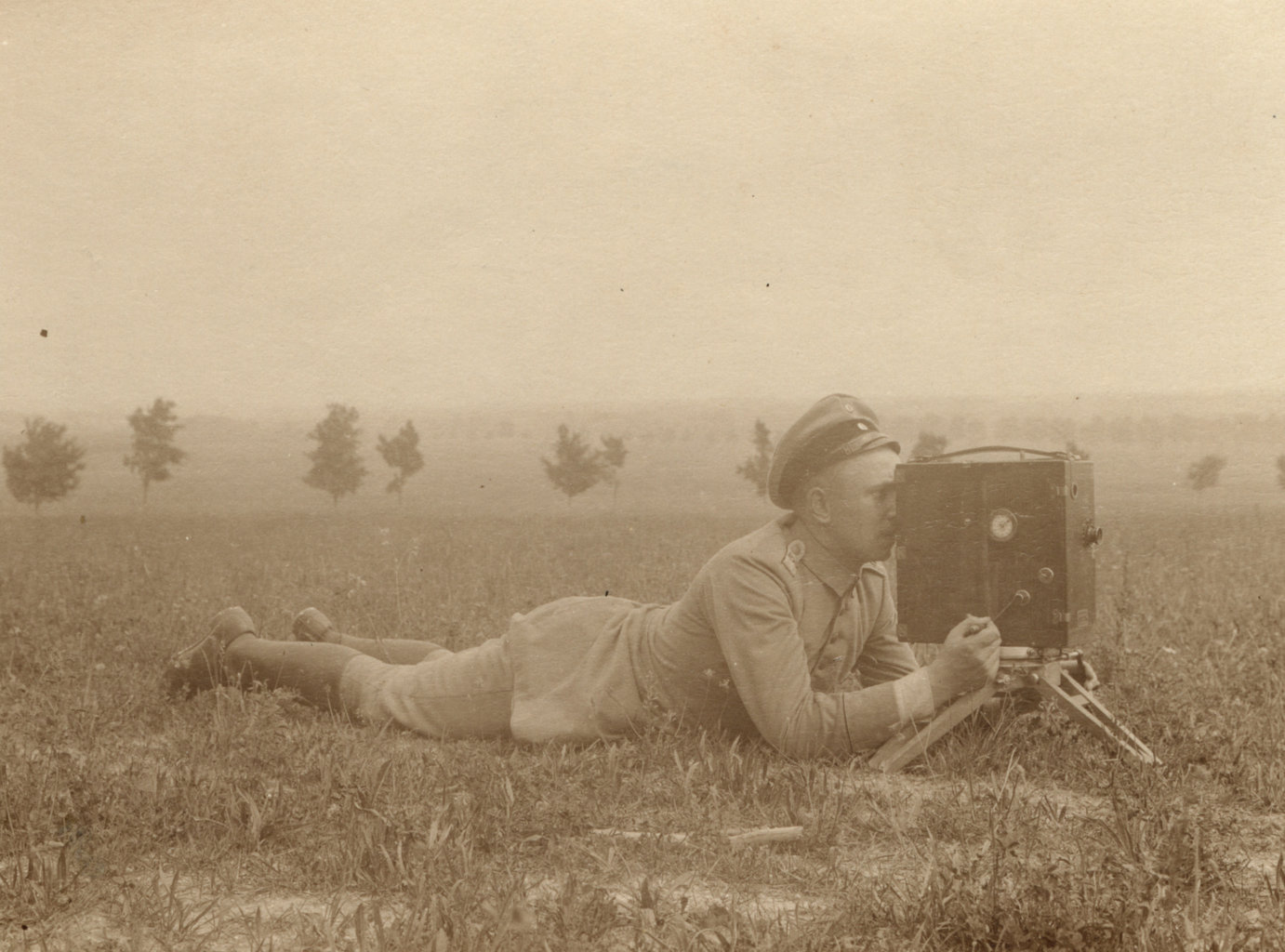 Born in Dresden in 1889 and trained as an engineer, Wolfgang Filzinger began to work in a Parisian film atelier in 1911. With the outbreak of World War One, he became a front cameraman and filmed with an “Ernemann-A” camera on the West Front throughout the war. View more 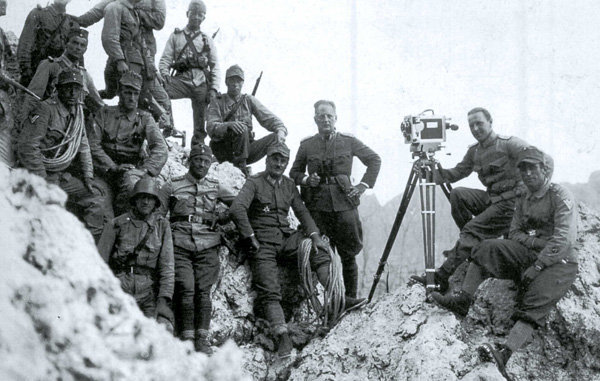 A group shot of an Austro-Hungarian camera team in the Tyrolean Alps. View more 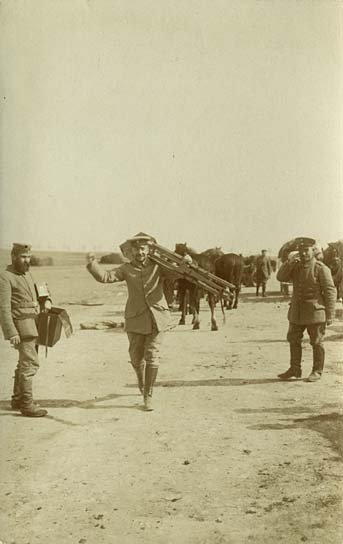 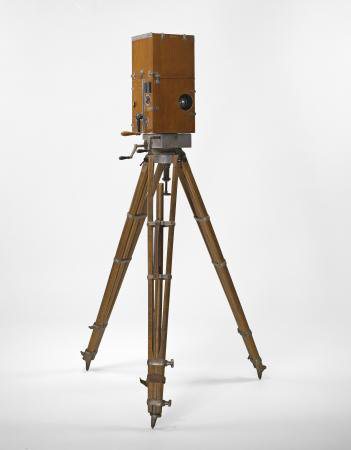 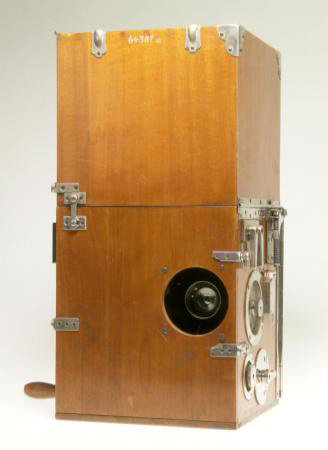 Produced from about 1914 on, Oskar Messter’s “Präzisionskamera Modell XIV” rated among the state-of-the-art camera technology during the First World War. Built of wood and metal, it weighted no less than 14 kilograms and could exposure up to 120 meters of 35mm film by crank handle. View more 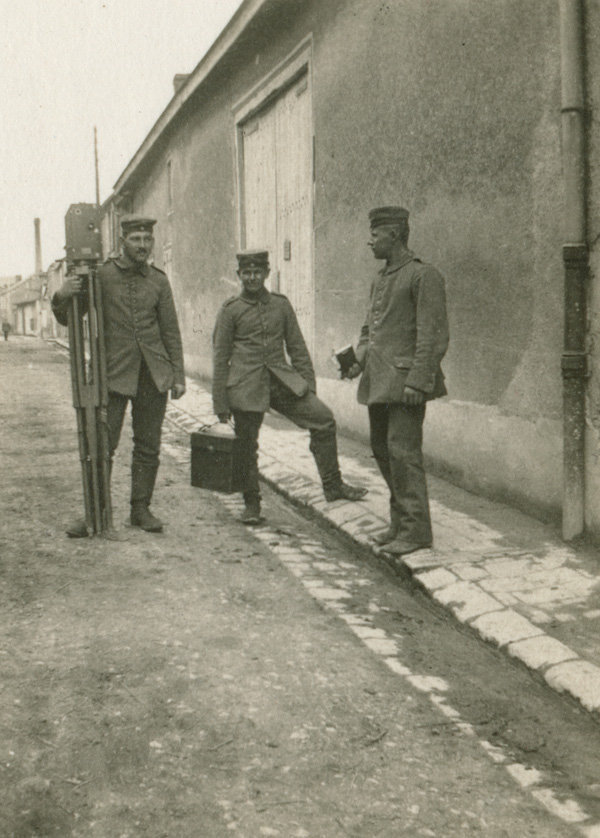 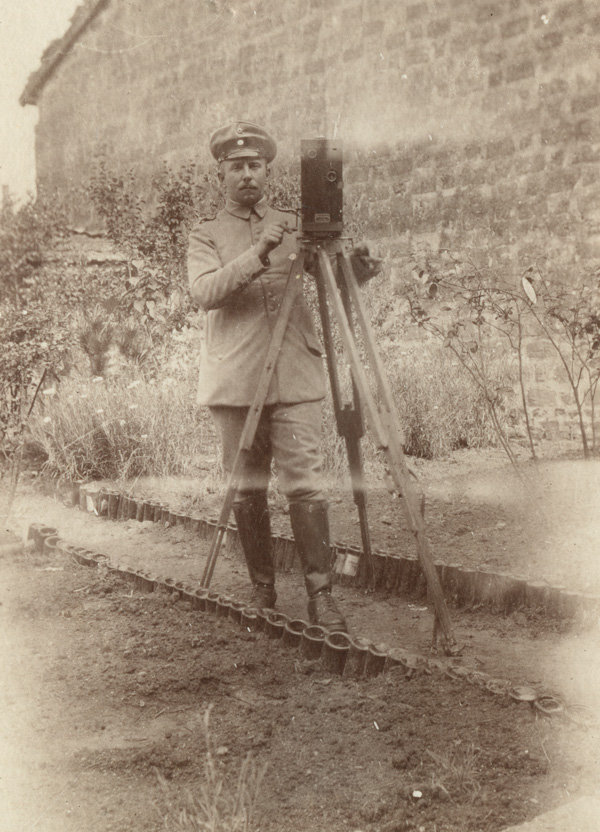 Wolfgang Filzinger and members of his camera team in about 1915. View more 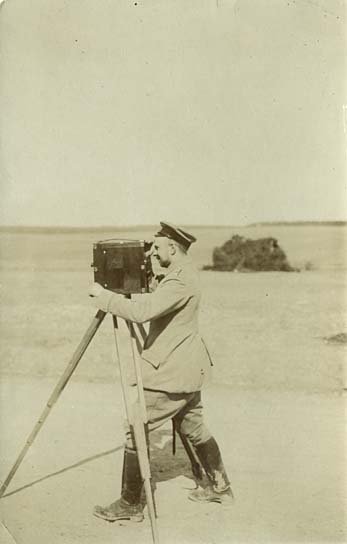 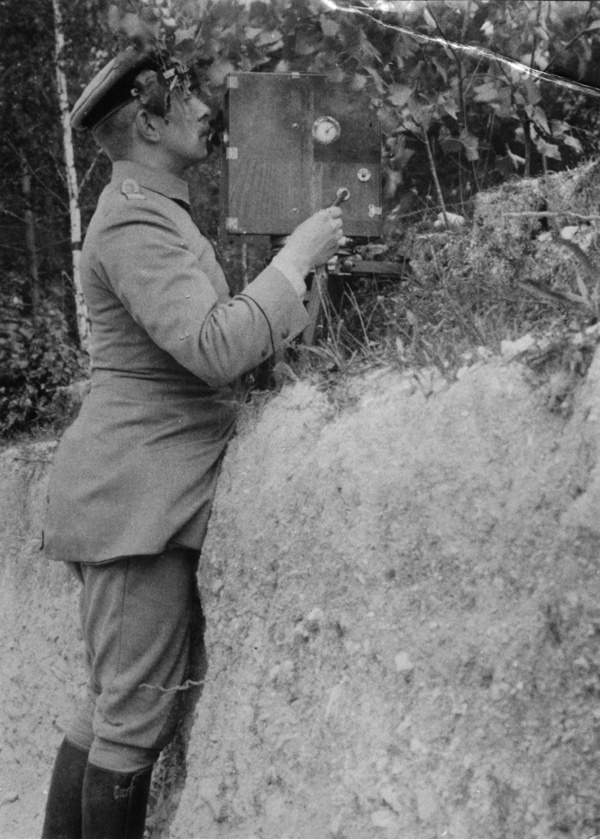 Wolfgang Filzinger using a regular, heavy tripod (left) and a short tripod (right), which was constructed by his assistants in order to allow for filming in a recumbent position at the front. View more
At the front