Suffering in and after the war

In addition to more than 16 million deaths, the mechanized warfare of World War One caused masses of wounded, crippled, and maimed soldiers on a scale previously unknown in history. Furthermore, hundreds of thousands of soldiers were reported missing in action, a novel phenomenon that meant heavy pain especially for relatives. Diseases spreading in the trenches on a massive scale seriously increased the war suffering.
Film dealt with these issues in various ways. During the war, the combatants for instance produced newsreel footage that played down the extent of suffering by showing neat military hospitals with only slightly wounded soldiers, or sought to draw some meaning from the fact that the war destroyed the lives of millions of people. After 1918, experiences of war suffering were particularly approached in feature films. Besides films that explicitly addressed death or injury at the front, many popular features from the 1920s can be read as indirect responses to experience of suffering related to the war.
View more

Numbers can be clear and plain, but they cannot give us the actual measure of pain. World War One’s toll, which can only be an approximate figure, is 20 million wounded. Many seriously wounded soldiers lived the tragedy both in their body and in their spirit, well beyond the end of the war. The images filmed during the conflict and after its end seem to ease the drama of mutilations and disablement behind a curtain composed of the necessary sacrifice, the loving support from fellow countrymen, the eager attention of the medics, the virtuous social reintegration made possible by a fair welfare system. Bodies, faces and some transient glances, however, can almost rip the curtain and unintentionally convey the dimensions of the drama. That is the subtle power of cinema. View more

[Wounded and Prisoners Behind the Lines on the Western Front] (1917)

Shot possibly at Arras on the Western Front, the film shows wounded British soldiers walking somewhere in the back area. Some are carrying stretchers, others are escorting German prisoners. These images, not featuring any intertitles, seem to be raw footage that was probably shot to be used in other films. View more

The brave disabled soldiers contribute to the rebirth of the French soil. During the war they defended the country bearing arms. Now, about three years later, they are still continuing to do this, now by pushing a plough over the fields. Thanks to their efforts, the nation is growing. View more 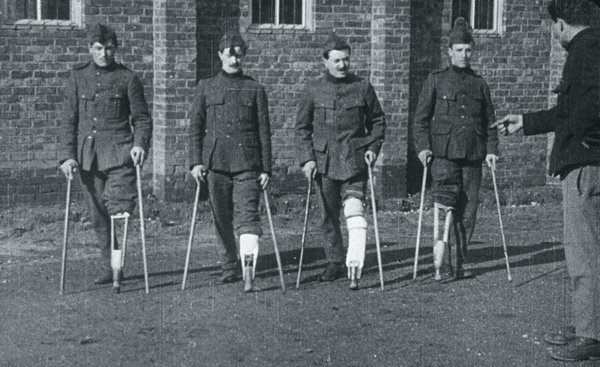 When mutilated bodies were presented on screen, they generally were presented as being restorable by modern surgery and orthopaedics engineering. View more

1917, in an unidentified military hospital in Austria-Hungary. The skills and the care of doctors and nurses seem to assure a bright future for the wounded soldiers. The pain remains beyond the screen. View more

Physical fitness for wounded soldiers in a military hospital in Sedan. The soldiers are Frenchmen, taken prisoner by the German Army. The film was produced by the central agency for the official propaganda of the German Supreme Army Command. View more

Here we see a professional school for disabled soldiers in Montpellier. Here, thanks to customized prostheses and special training, the injured men are saved from loneliness and despair. They will be able to live and work like everybody else (or at least, that is the intention). View more

1914. A square in Eger, northern Hungary. A huge crowd waits for compatriots coming back from the front. Many soldiers are transported by stretchers. The film shows a crowd of people welcoming the soldiers home in a gathering of national solidarity. View more

Millions of soldiers as well as civilians fell victim to diseases caused by the First World War. The conditions in the trenches turned out to be ideal breeding grounds for vermin such as rats and lice and for infectious diseases, in particular typhoid, influenza, and leptospirosis. Furthermore, new, horrific symptoms such as “trench foot”, “shell shock” or “trench mouth” spread at the frontlines on a massive scale. As the war drew to a close, the most devastating flu pandemic in history hit the entire globe from early 1918 on, mainly spread by soldiers and sailors. Within two years this influenza killed more people than the war itself.
Film audiences rarely encountered these elements of the war on screen. Diseases like influenza or typhoid were topics difficult to portray on film, and the military did not want to circulate images of victims suffering from shell shock or trench mouth. However, in order to meet the massive public interest in the fate of sick and wounded soldiers, film production (be it directly or indirectly state-controlled) had to cover this issue in some way. Thus, a considerable number of hospital films were produced – most of them newsreel items – depicting slightly wounded men in neat and sometimes even idyllic military hospitals. The propagandistic message of these films is to show how thankful the country is for the loyal service of its soldiers.
View more

Amateur footage from around 1920, shot by the US doctor William Held during a stay in Germany. This sequence shows a public recreation home, probably in Berlin, for children suffering from malnutrition and rickets as a consequence of the war. View more

On the case of the New Zealand Division on the Western Front, this documentary footage exemplarily shows how the military tried to handle the masses of sick and wounded soldiers. In this clip, some hygiene measures taken against the spread of diseases can be seen. View more 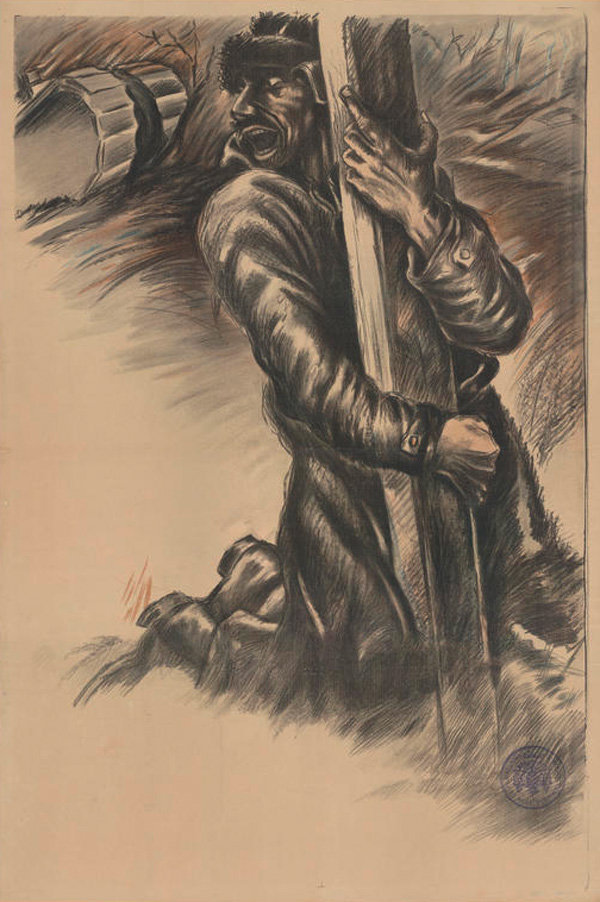 A visualisation of traumatising experiences at the front. View more

This staging of the British Army 47th Stationary Hospital in Palestine can be regarded as exemplary for many cinematic representations of military hospitals during the First World War. View more

A depiction of the sick and wounded completely according to the taste of military commanders: Slightly injured soldiers having a nice time playing golf in the park. View more

Towards the end of World War One, food supplies became increasingly scarce in the combatant countries, and hunger spread. Effectively blocking supplies and causing food shortage across the country, the Allied naval blockade made the situation in Germany especially dire; about 900.000 Germans starved to death. Belgium, which imported three-quarters of its food at that time, was another country deeply affected. Its naval ports were blockaded by Great Britian, and the country itself occupied by Germany. A further consequence of the economic disturbances in the course of the war was the famine in Russia during the winter of 1916/1917, which continued throughout the Russian Revolution of 1917.
View more

Soon after German troops invaded Belgium in August 1914, the country suffered from a shortage of food supplies. Antony Neuckens and the “Comité National de Secours et d’Alimentation” encouraged a cooperative system for providing citizens with meals at a reasonable price. View more

In order to supply civilians with food and groceries during the war, a distribution system with food vouchers was established in Austria-Hungary. View more 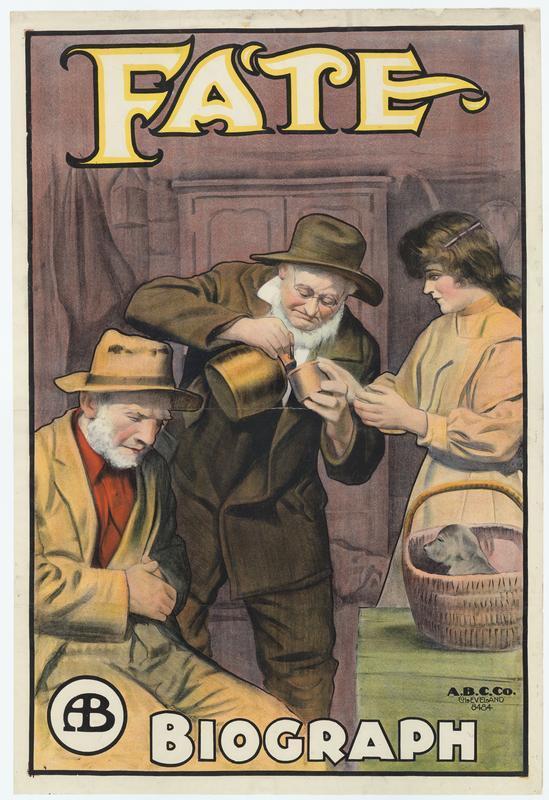 Released on the eve of World War One in March 1913, D. W. Griffith’s “Fate” rates among the earliest feature films that addressed poverty. View more

A professional in the medical field, US citizen William Held headed for Europe late in Summer 1919 and lived in Berlin until 1922. View more

During and after the war, German propaganda sought to spread the view that the Entente blockade against Germany must be regarded as a crime against humanity. This film from about 1920 puts this point forward in a strong rhetoric, providing numerous details about the suffering of Germany’s civilian population. View more

The severe Russian famine of 1921 resulted from economic difficulties that had started during WWI. An international initiative led by the first High Commissioner for Refugees appointed by the League of Nations, Dr. Fridtjof Nansen from Norway, worked to help the starving people in the region. View more
Suffering in and after the war